Not a creature was stirring, not even a mouse;

The air conditioning on at full speed,

In hopes that our hot house would soon cool indeed.

The dogs were all snoring, snug in their bed,

While visions of Christmas storybooks danced in my head.

Okay, it’s a lame poem, but I think you get the drift. It’s August and I spent a good part of the weekend hiding in my cool house and sorting through Christmas storybooks to list on Etsy, and, it’s only four months until Christmas!

It’s at this time of year that I start looking at old copies of the Christmas issues of Women’s Day and Canadian Living magazines, and thinking ahead to entertainment possibilities over the holidays and homemade gifts that I might like to give to those I love this year. (Not to suggest I didn’t love them last year!) I suspect a lot of guys won’t understand this, but raise your hands ladies if you know what I mean! And, what better way to feel cool during a heatwave then to mentally transport yourself to a time and place known for snow drifts and frost on window panes–even if your climate means you only see this in the movies?

As you might have guessed from the poem at the start, one of my absolute favourite Christmas stories is The Night Before Christmas, a.k.a. ‘Twas the Night Before Christmas or A Visit From St. Nicholas. When I was a child we had a beat up old copy, a Big Golden Book I think, that had probably been passed down from one of my twenty odd older cousins. (“Odd” referring to the number, not the cousins, although with a couple of them would probably qualify for that adjective.) I loved that book. The spine was almost non-existent, but there was something magical about the illustrations. Now, keep in mind that I seem to recall believing in Santa Claus until I was something like twelve years old—so perhaps those illustrations were just a bit too magical, but I loved that book. As an adult, I’ve searched endlessly for an exact copy of it, albeit perhaps with an intact spine, but I’ve never found it. Perhaps I truly have not stumbled across the same edition of the book I remember, or perhaps like other memories and the passage of time, the book is different in my mind than any copy of the story in existence. Regardless, my search will go on.

We lived in England for a few years around the turn of the century (just to clarify, THIS century, i.e. 2000—I’m getting old, or so it feels most days, but not THAT old!) We initially rented a house in a small village named Thorpe Waterville in Northamptonshire. It was a delightful little village with its fair share of thatched cottages and green pastures like something out of a postcard. As a tourist/newly-landed-resident, who has always had an interest in genealogy and history, I delved into all things history to do with this neat little village and the surrounding area.

Less than a mile from Thorpe Waterville, up a country lane, was another small village named Lilford, and Lilford had an estate called, aptly enough, Lilford Hall. (If you’re interested in history, this building was used as a hospital by American troops during WWII and there is a lot of information and photos online to do with this.) I was thrilled to discover that Lady Mary Elizabeth Fox Powys Lilford, the mistress of the hall in the mid 1800’s, was in fact, the cousin of Clement Clark Moore the author of “‘Twas the Night Before Christmas” and that correspondence between them exists in archives to this day. I wonder if they actually corresponded about the poem?

The actual poem, The Night Before Christmas has long since fallen into public domain meaning no copyright remains on this work, and many authors and publishers have taken advantage of this. As you may have noticed there are endless copies and versions of this beloved poem.

Here are a few examples of this enduring Christmas tale:

I think my favourite versions of The Night Before Christmas are the pop-up books! With that little bit of extra detail and dimension, it’s that much easier to envision Santa and his eight reindeer flying through the sky with a sleigh full of toys, particularly if you’re a young child (or have been dipping into the mulled wine a bit too much!) 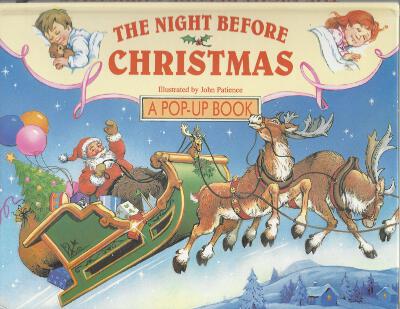 This book, copyright 2003, is beautifully designed and puts the reader right in the story. Just take a look at a few of the pages: 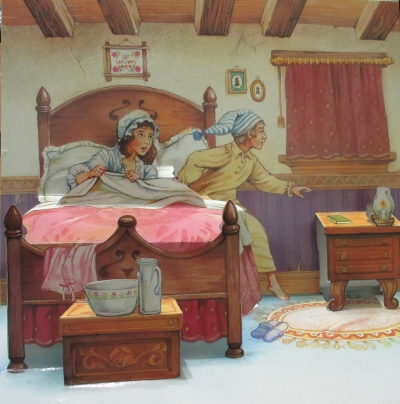 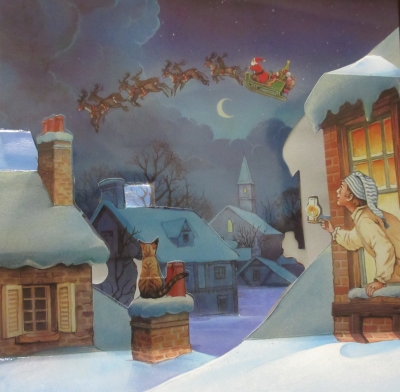 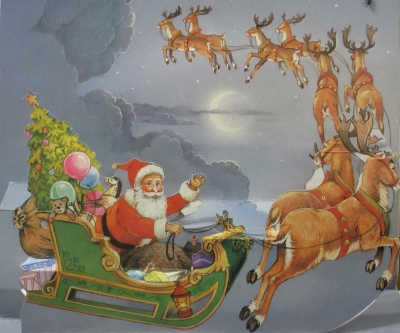 And, this one is a Magic Motion Pop-up book from Random House in the late 1960’s–back in the day when I still believed in Santa Claus. Don’t you just love all the wild colours from back in the Mad Men era? 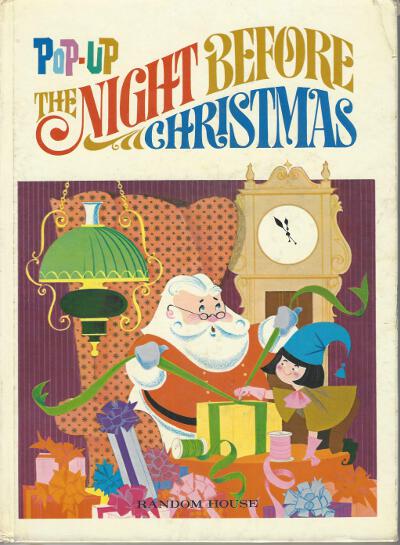 The book requires interaction to create the motion and the reader has to pull on a number of tabs clearly labeled “Pull” to see the scene change. It’s pretty neat actually. Take a look at some of the pages from this book: 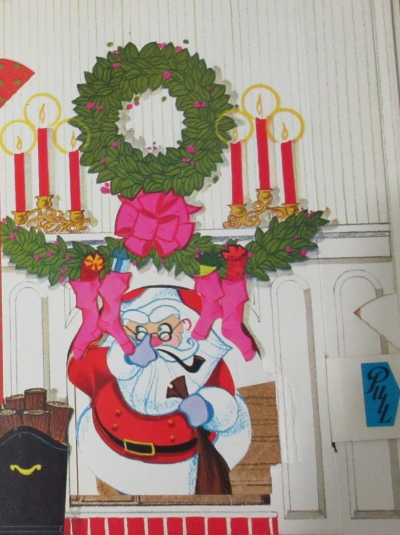 Now you see him, now you don’t! 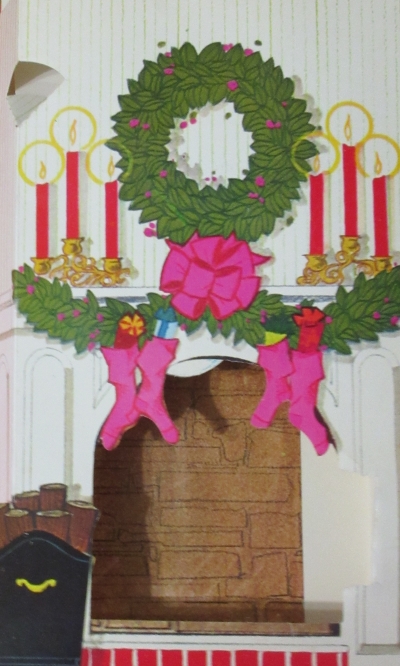 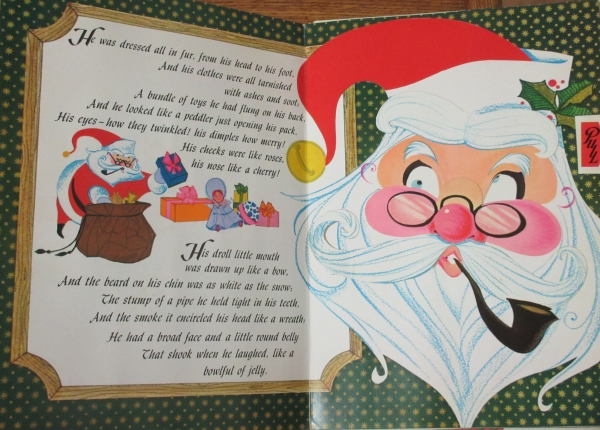 See how the expression on Santa’s face changes? 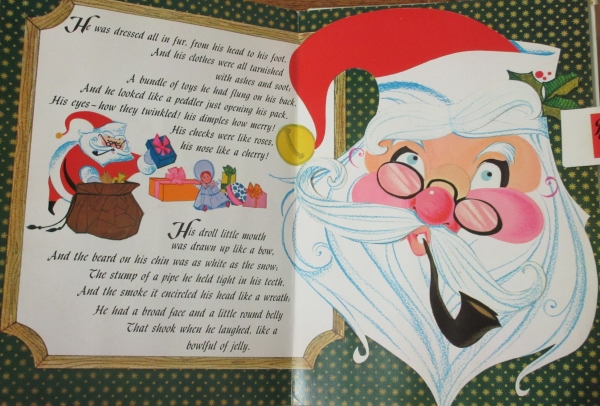 Did you have a favourite version of The Night Before Christmas or another Christmas story that can still bring you back to memories of gathering round the Christmas tree with your family and opening presents? If so, tell me about it in the comments.

Meanwhile, I’ll continue my search for THAT elusive copy of The Night Before Christmas from my childhood!

One thought on “‘Twas Four Months Before Christmas”